Sculptress Natasja Bennink created this man-sized statue in memory of Titus Brandsma in the park near the Bonifatius chapel in Dokkum in 2004. It is a counterpart to the martyr statue of St. Boniface at the same chapel. Bennink’s design is a bronze sculpture with recognizable Titus Brandsma features. The choice was not made to reproduce existing sculptures, known from many photographs. It is a new creation, figurative, independent of existing Brandsma iconography and classic statues of saints. Titus does not stand on a pedestal but with bare feet on the ground. He is not depicted as a priest or professor, but as a suffering and contemplative human being. Not as a prisoner in Dachau, nor with the familiar glasses. It shows that one man in the concreteness of his earthly existence.

Trom the physical characteristics of Father Titus, the artist makes a choice. Thus, not a naturalistic but a spiritual portrait emerges. The monk’s habit is indicated only on the area of the legs and recalls the Carmelite mystic. The lowered eyes, arms and hands extended downwards, the nakedness of the upper body: these are features that refer to Christ himself as the Man of Sorrows. This goes to the heart of Catholic imagery. The image of a “saint” allows the viewer to experience something of Christ, the one God. True images of saints are never reproductions of living persons. They show spiritual qualities. The sculpture was commissioned by the Diocese of Groningen-Leeuwarden on the occasion of the 1250th anniversary of Boniface.        (source: Sible Blaauw from: spreek! Mei 2019)

The human being is central to the monumental bronze sculptures of Natasja Bennink. She carefully studies the anatomy and proportions of her model and transfers them into clay. Once the basis is right, the expression takes over; typical of her style are the free, raw touch and the deliberate reduction of forms. In this way, she creates images that deliberately transcend figuration. The human body functions as the bearer of an underlying concept, in which connectedness is often the red thread. Man connected to his time, the woman connected to her body, lovers in a kiss connected to each other or residents connected to their community. These are layered images in which the universal becomes tangible and the individual remains visible.

Natasja Bennink (1974) was trained at Academy Minerva in Groningen and the Academy of Fine Arts in Athens. She lives and works in the former town hall of Ezinge, in Groningen. Bennink’s work is included in various museum collections, including those of the Drents Museum, Museum het Depot, National Sculpture Park De Havixhorst and Museum de Buitenplaats. Her sculptures can also be found in many places in the public space. For the State Hall of the Province of Drenthe she made the static portrait ‘Our King’, in Appingedam she immortalized five generations of kissing lovers, all residents of the city. The ‘Venus of Kloosterveen’ adorns the walls of Assen and in Dokkum there is a monument to the beatified priest Titus Brandsma. 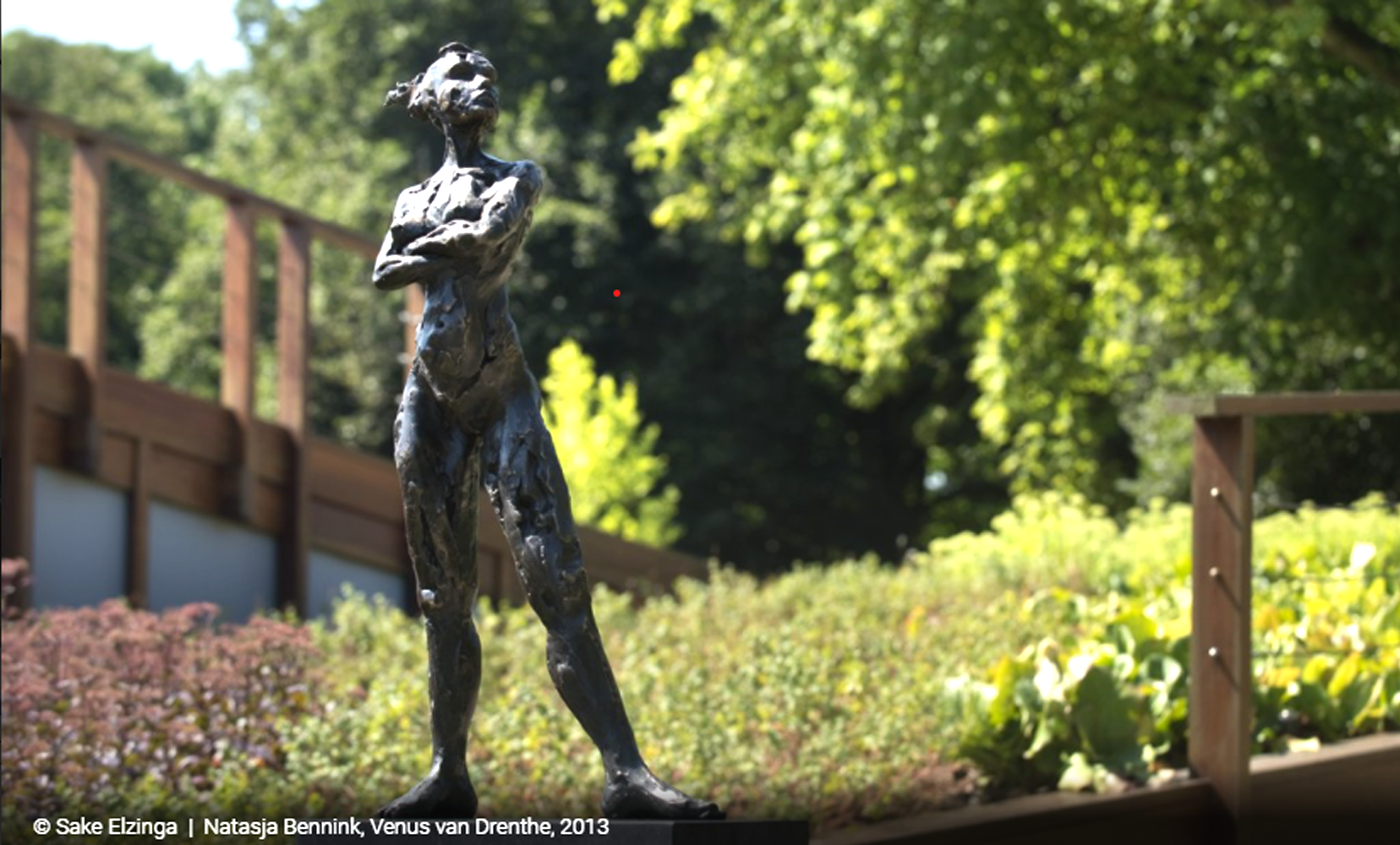 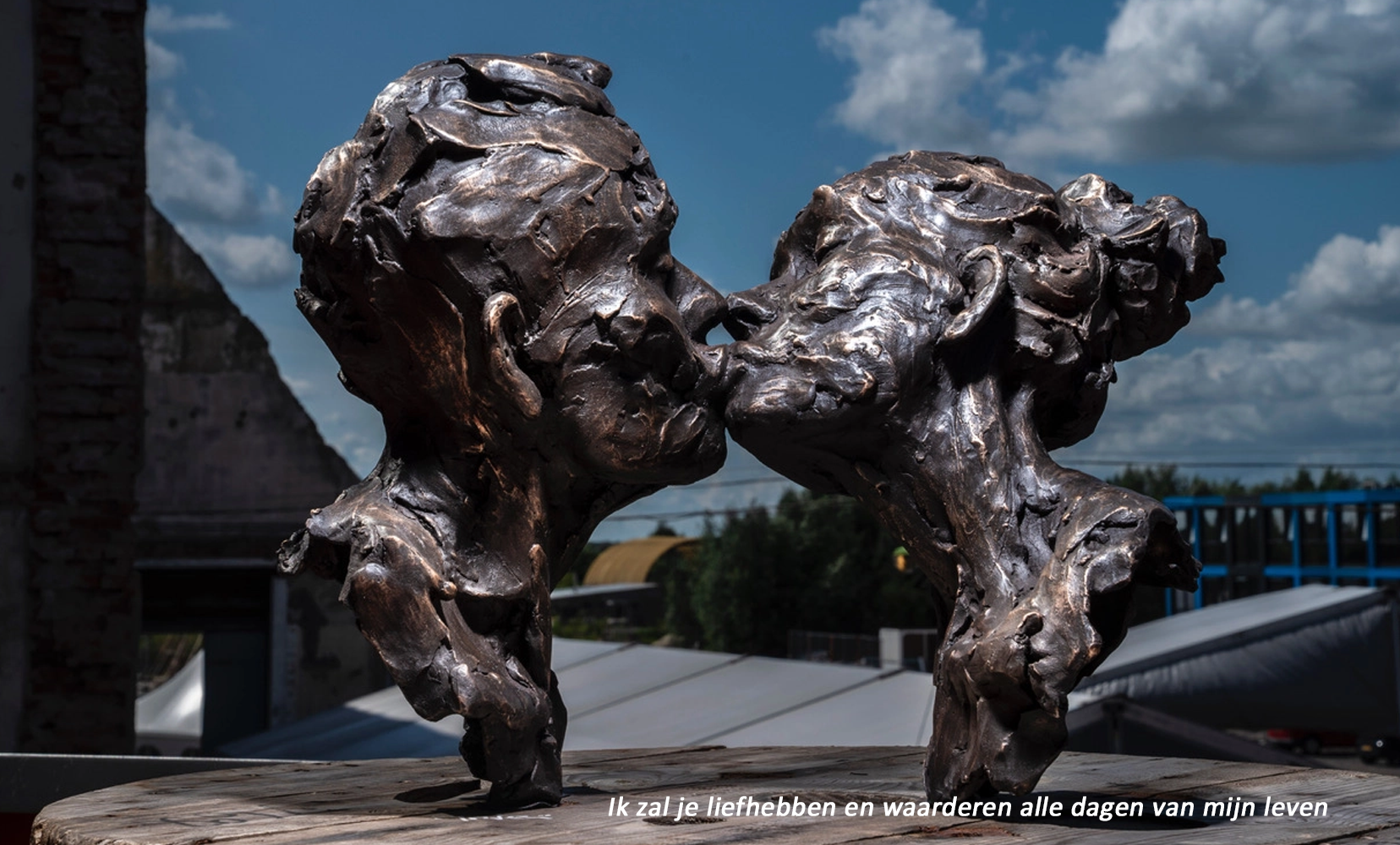 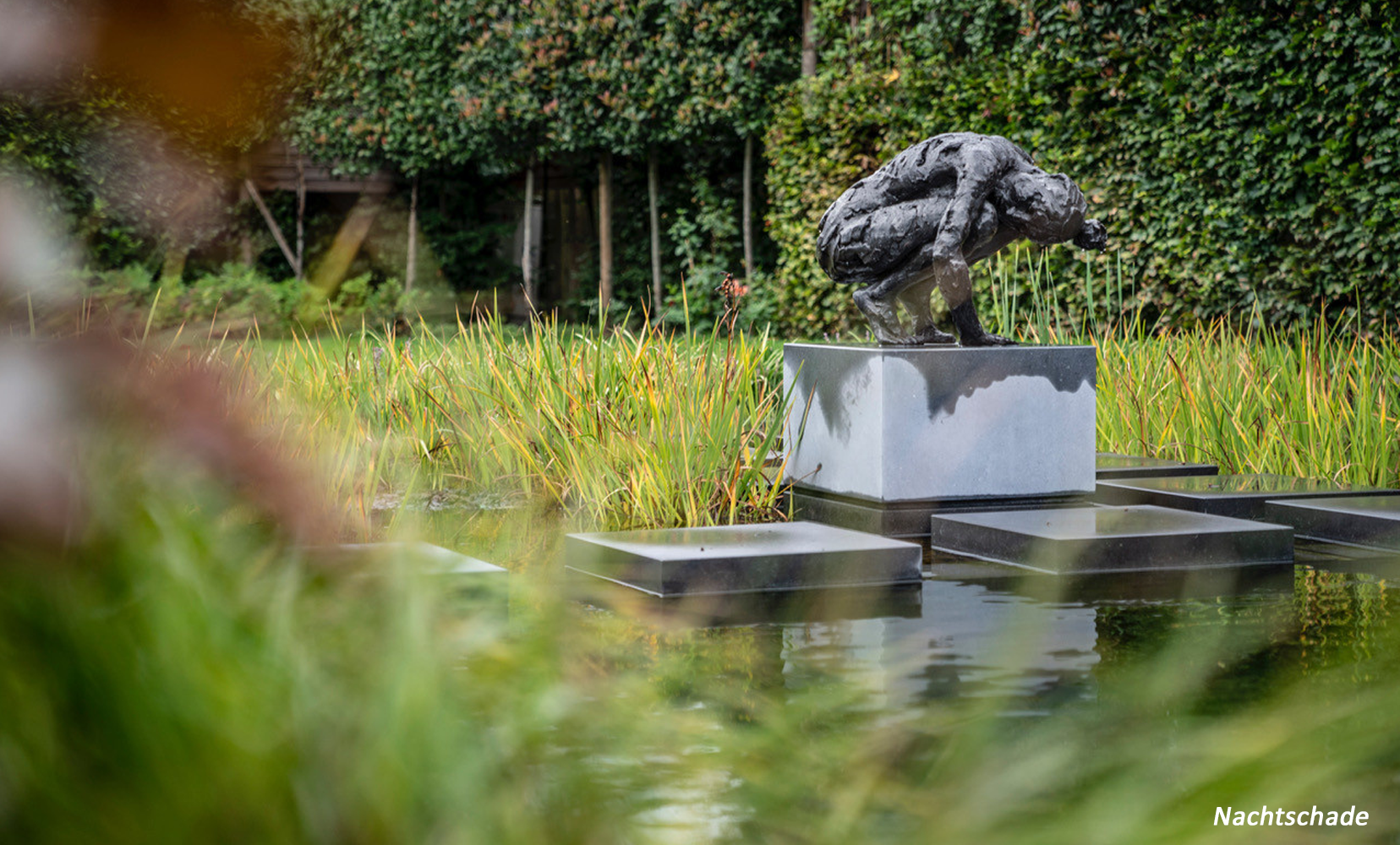 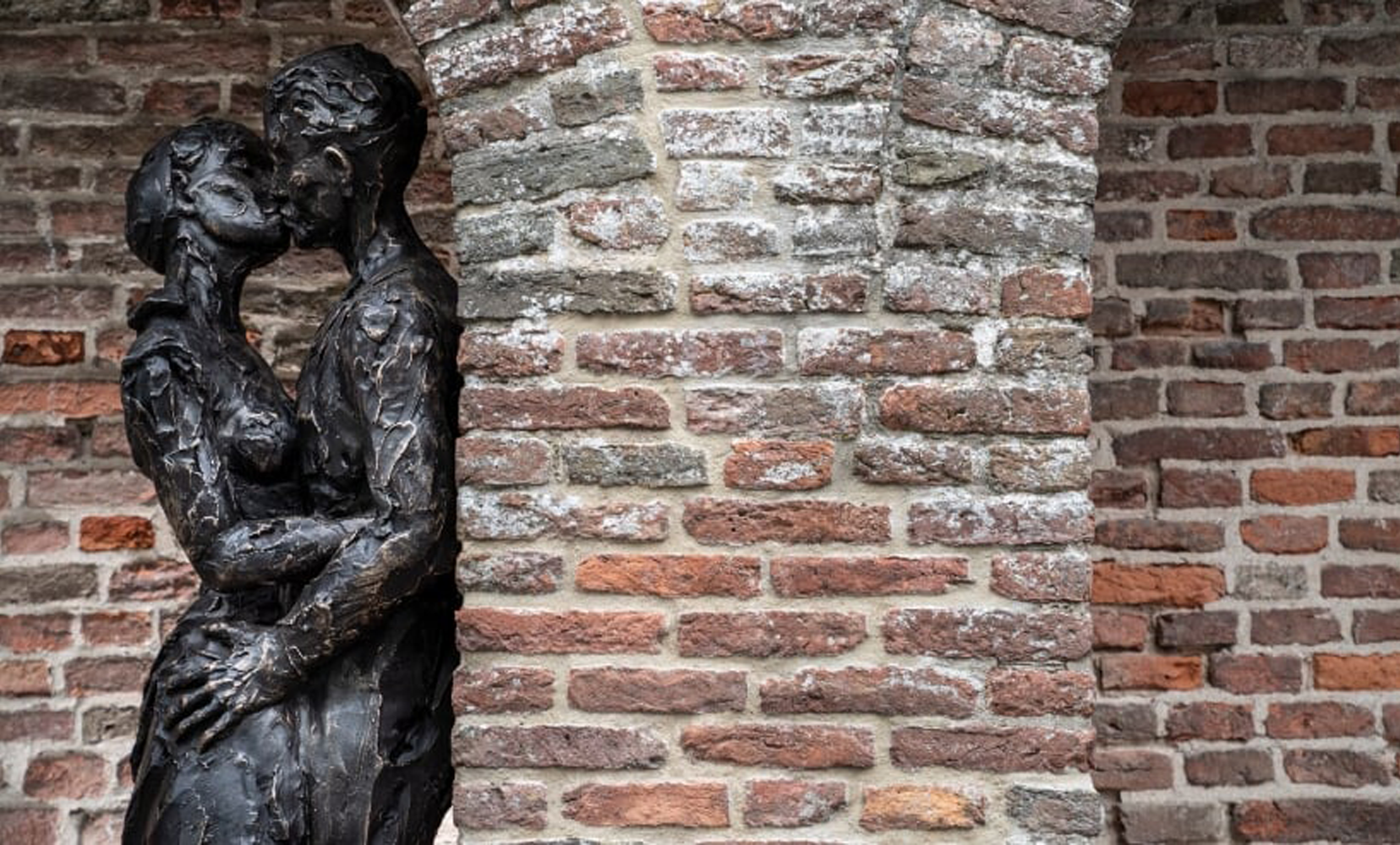 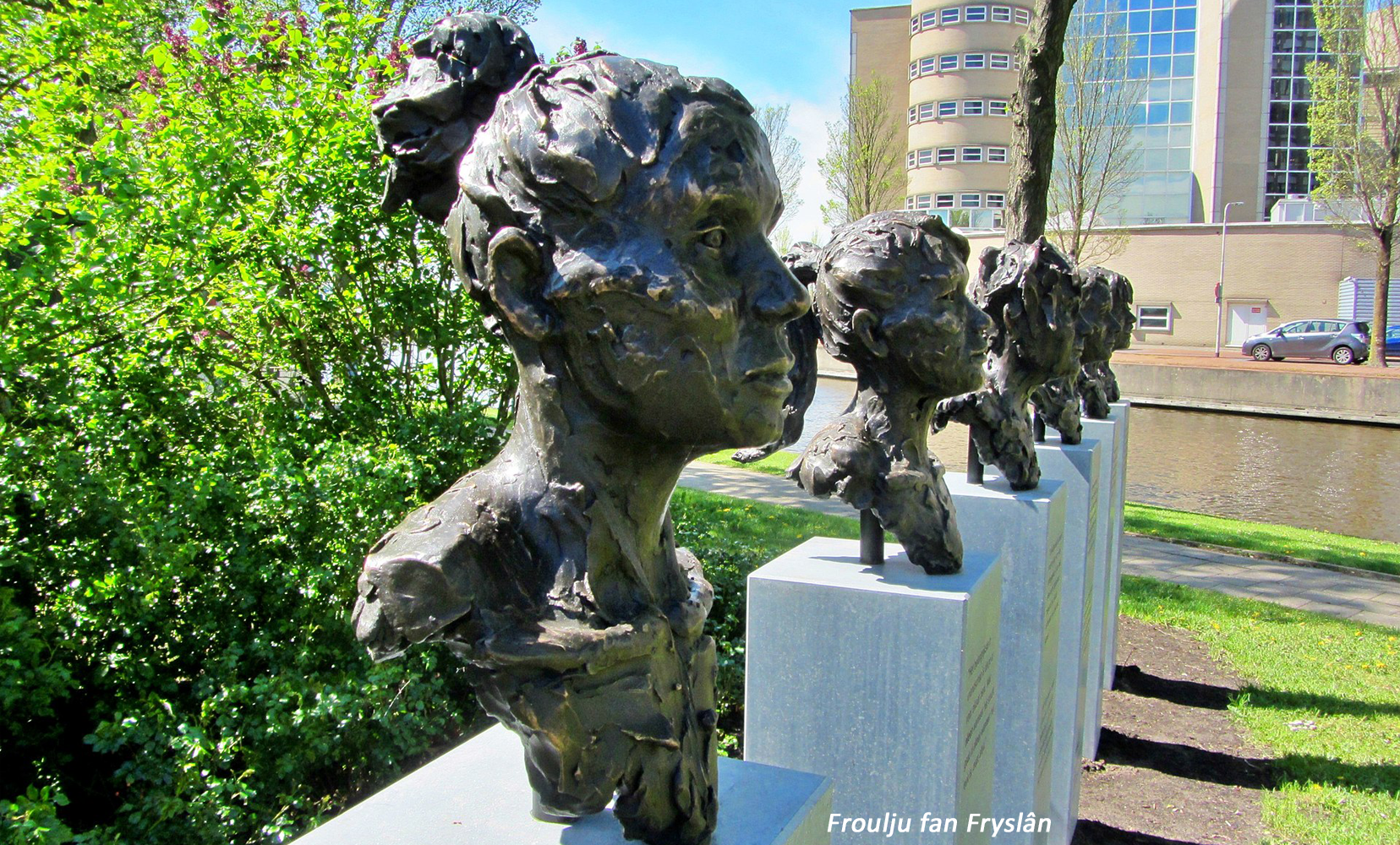 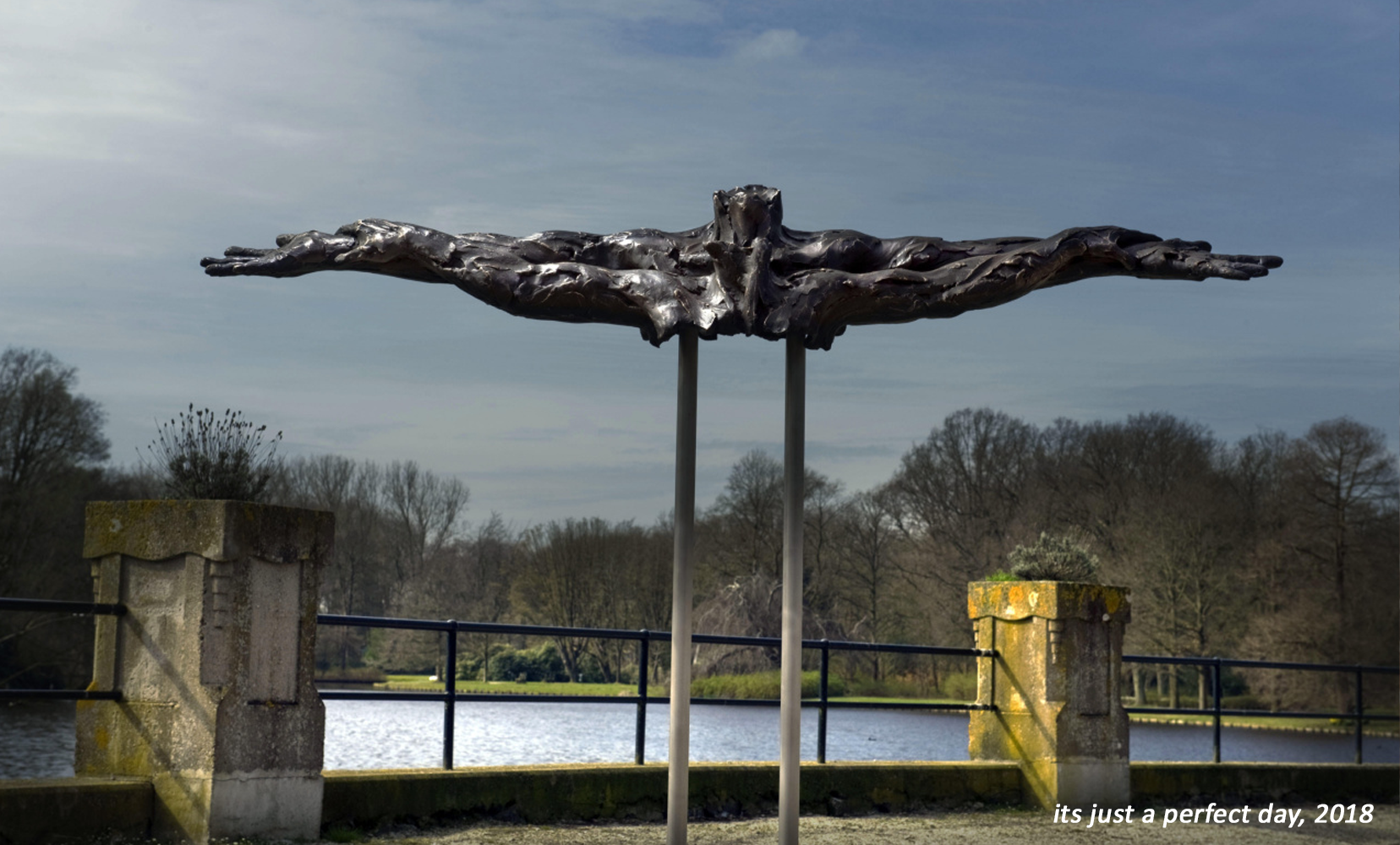 Natasja is aware of the pioneering role she has as an artist. That’s why she sometimes chooses themes that rub a little. She forces the viewer to look with different eyes. A recurring theme in her work is the ‘female gaze’, the woman seen through the eyes of a woman. Thus her Venus sculptures are tough, self-confident, proud, honest, sensual or vulnerable, but never ‘just’ beautiful. This can be experienced by one as recognizable and encouraging, by another as confrontational or provocative.

A kissing portrait of Bennink’s own grandparents has been placed in the UMCG hospital, and as part of the cultural capital Leeuwarden-Fryslân 2018, she created the ‘Eregalerij der Friezinnen’, six portraits in bronze of six Friezinnen, chosen by the Friese Mienskip. Bennink exhibits regularly at home and abroad and has been associated with Galerie Van Campen & Rochtus in Antwerp since 2000. She is a teacher at the Wackers Academy in Amsterdam. (source: www.natasjabennink.nl/) 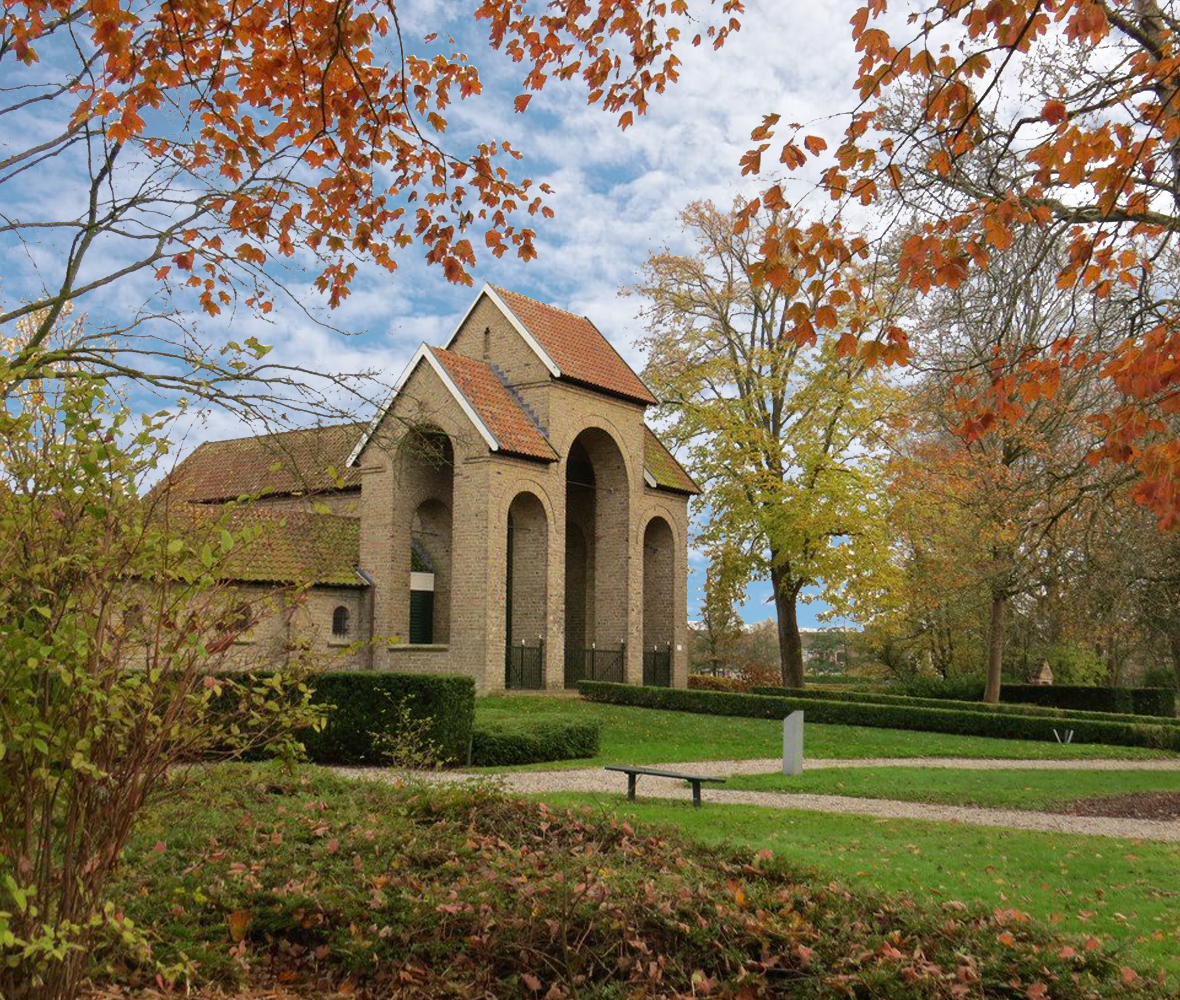 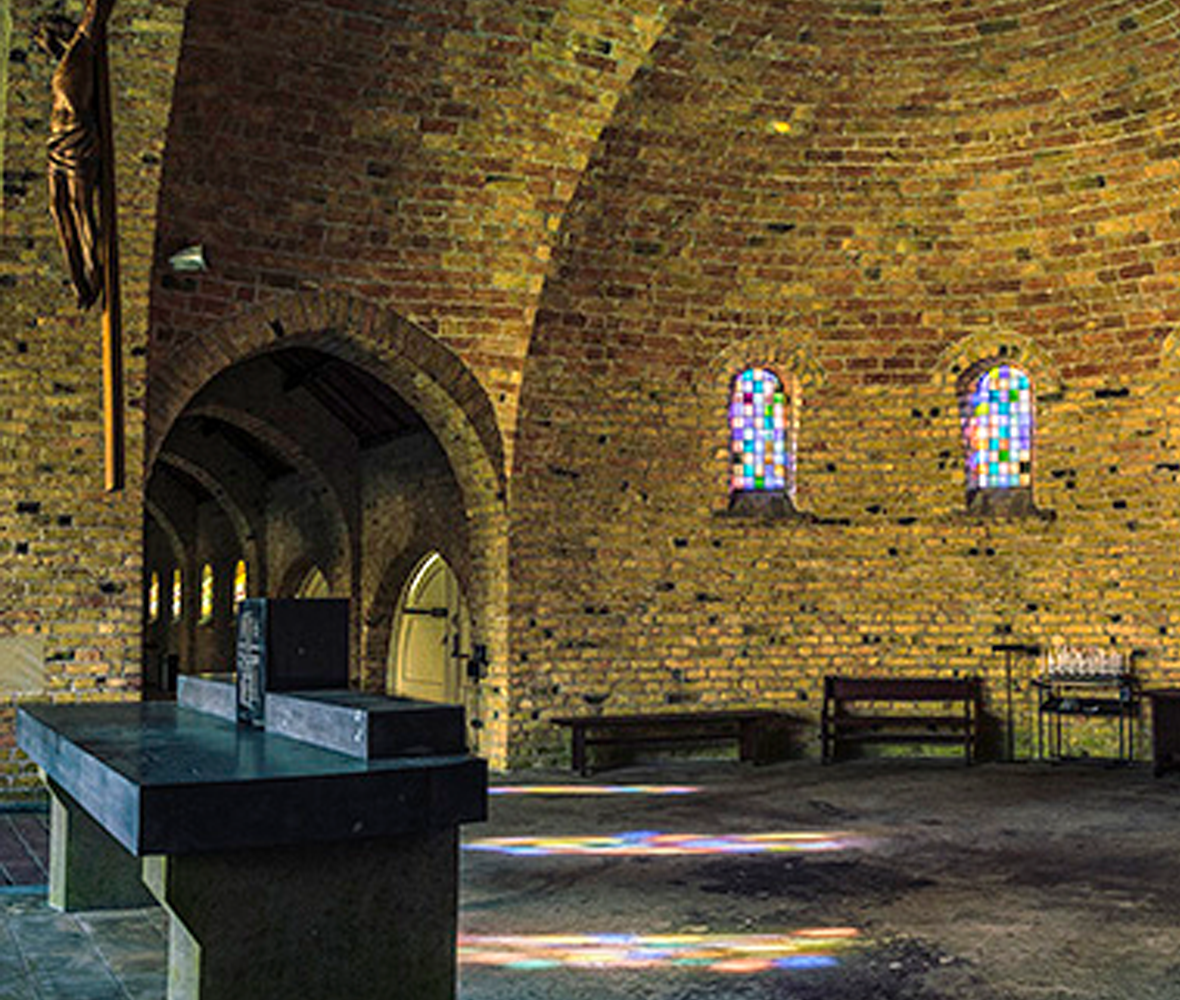 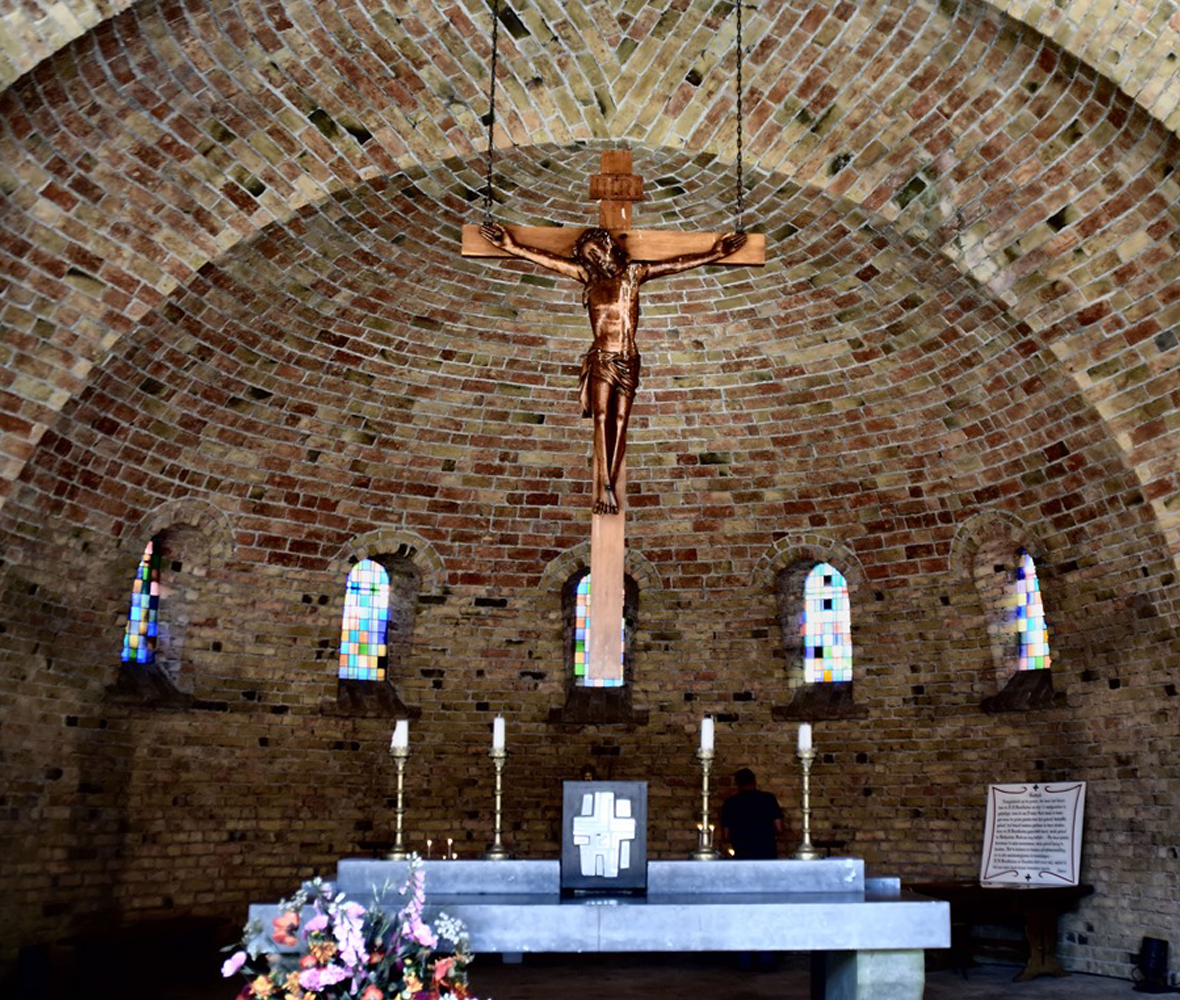 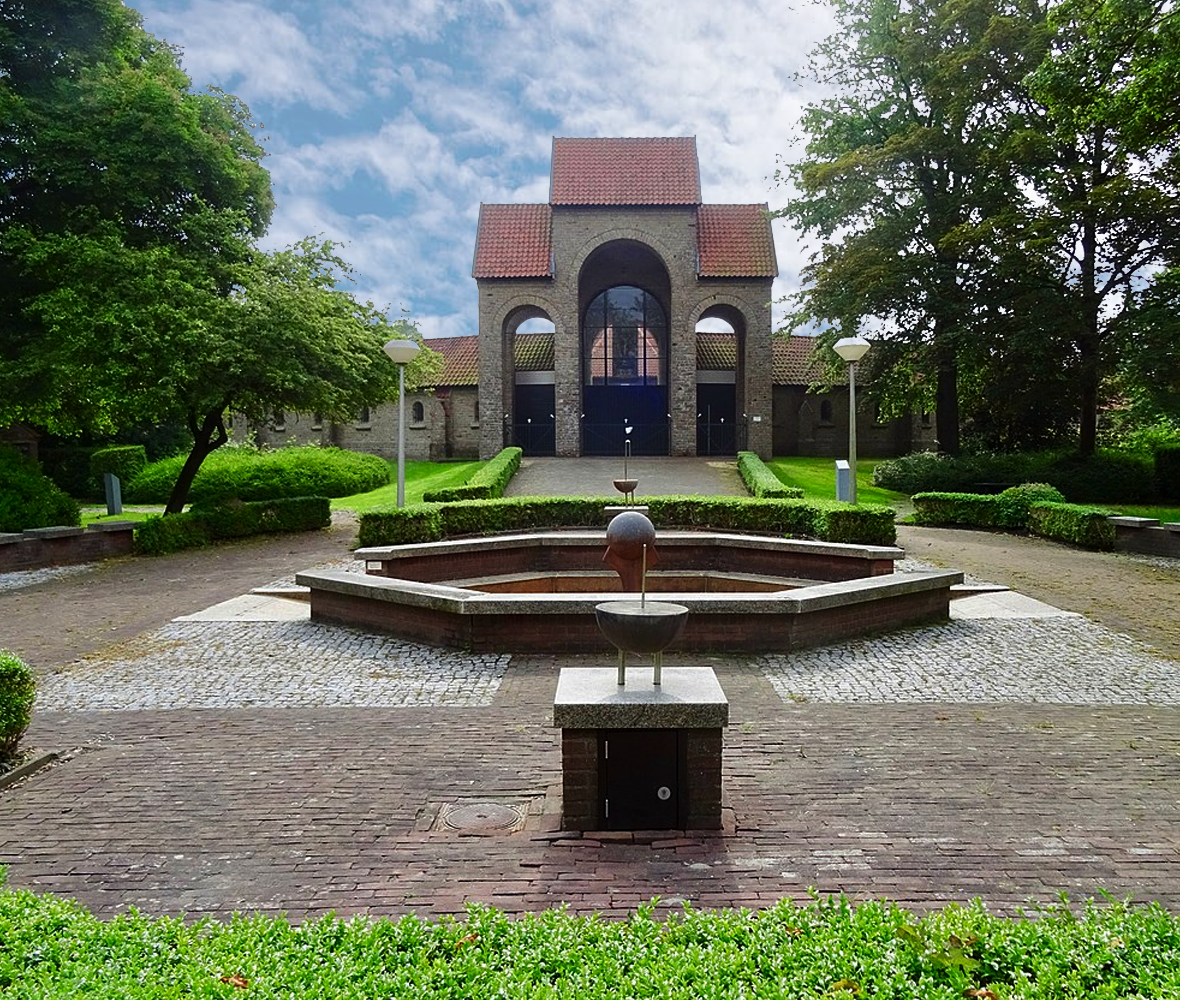 In 1925 the Brotherhood of Saint Boniface and Companions was founded in Dokkum, which wanted to make a pilgrimage site of Dokkum, the place where Boniface had been murdered. Titus Brandsma was one of the members of the main board.
In 1926 the first national pilgrimage took place. In 1933, to a design by architect Hendrik Willem Valk, a chapel was built and consecrated the following year.

Shortly thereafter, in 1935, Titus Brandsma began collecting old monastery bricks intended to build the chapels for the Way of the Cross park planned next to the main chapel.
In 1937, on behalf of the Brotherhood, he turned to Jac Maris to ask if he could make a Way of the Cross for it. Maris was very happy with the invitation and immediately wrote a letter of confirmation. (Source: Dr. Leo Ewals, KDC 2016) 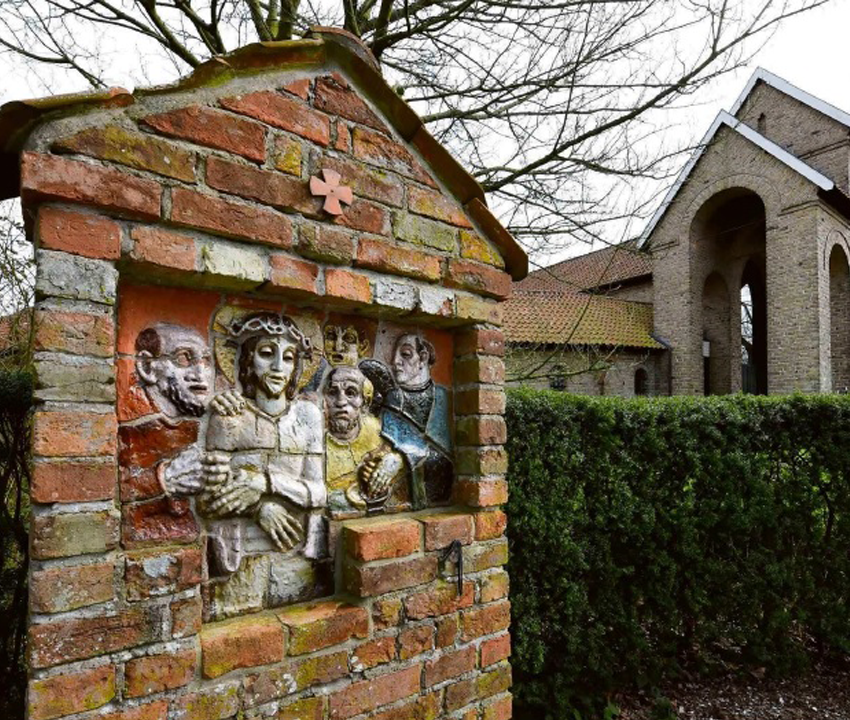 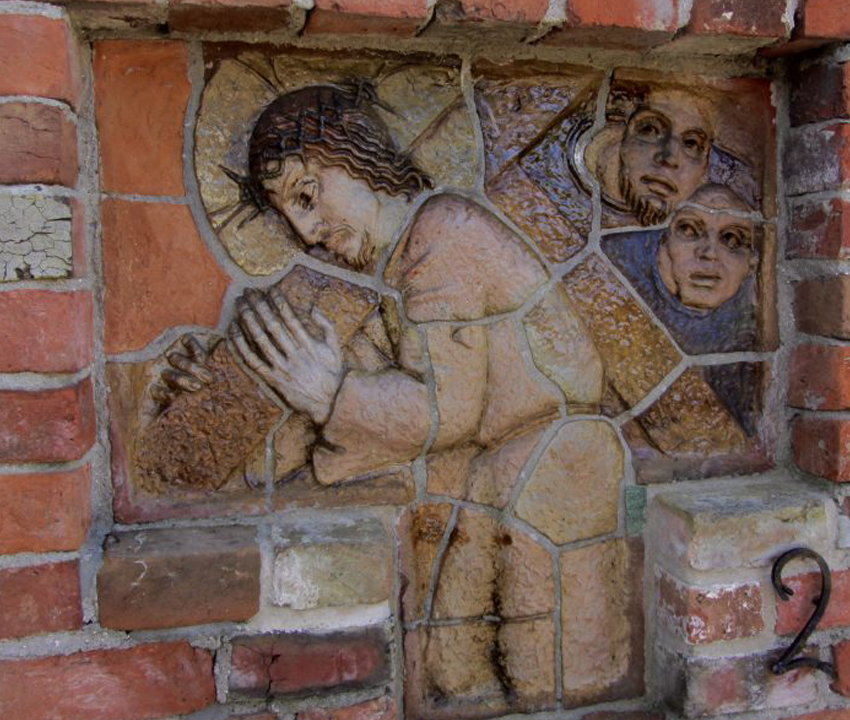 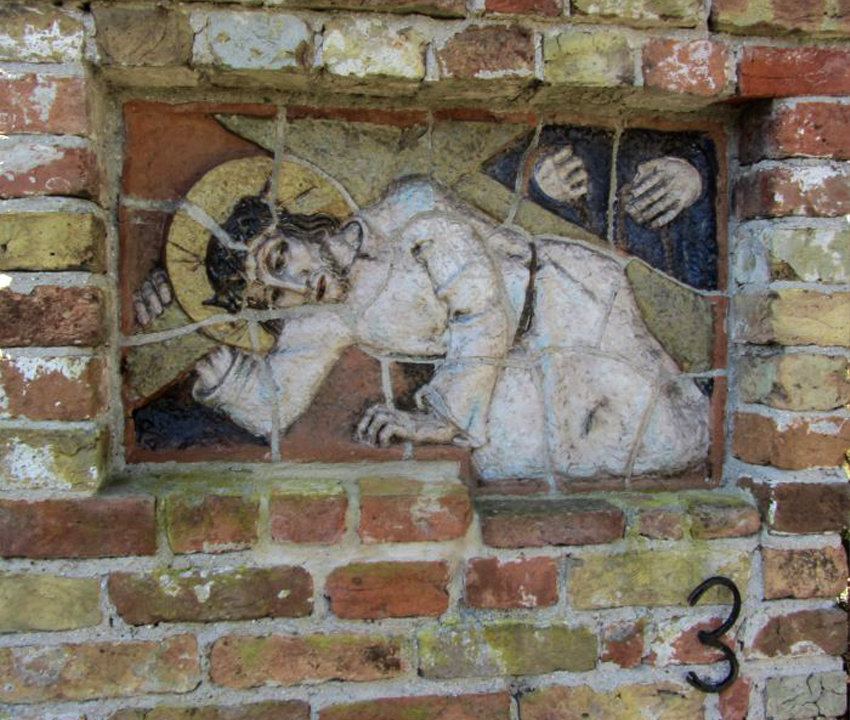 Maris made it a particularly evocative Stations of the Cross, much more expressive than the Carmel-Madonna and Joseph he had previously made for Brandsma. Apparently Brandsma allowed him to follow his inspiration unhindered, as Maris had requested in his first letter to the Carmelite. He set up the compositions with predominantly semi-figures, so that facial expression and gesture become very important and the event takes place close to the viewer. Sometimes we don’t even see more than the hands of the secondary figures.

He made the stations in clay, cut them into sections, baked and glazed them and finally put them back together again. These recesses were rectangular, with extensions at the bottom of a number of stations.
(Source: Dr. Leo Ewals, Catholic Documentation Center, 2016)

Titus himself did not live to see the Stations of the Cross. He died 26 July 1942 in Dachau, six months after he was captured. In the first period of his imprisonment, during his stay in the penal prison of Scheveningen, Titus wrote the Stations of the Cross meditations especially for the Boniface Pilgrimage Park in Dokkum.
(Source: Anne-Marie Bos, Friesch Dagblad, March 30, 2019) 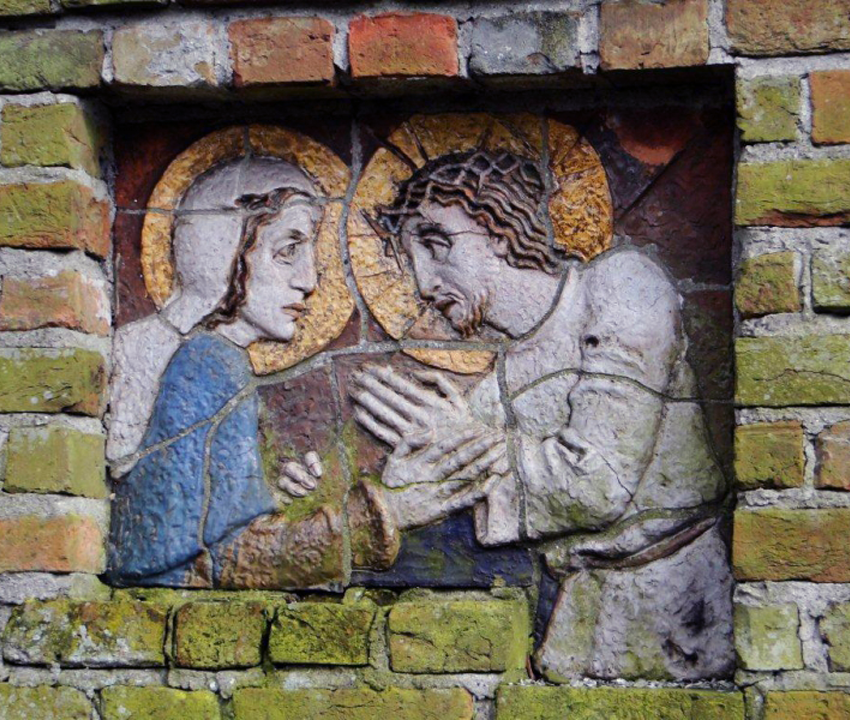 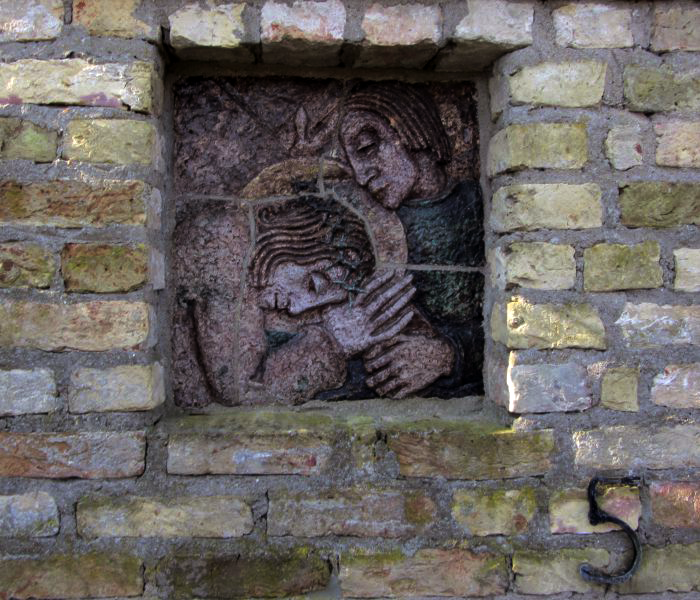 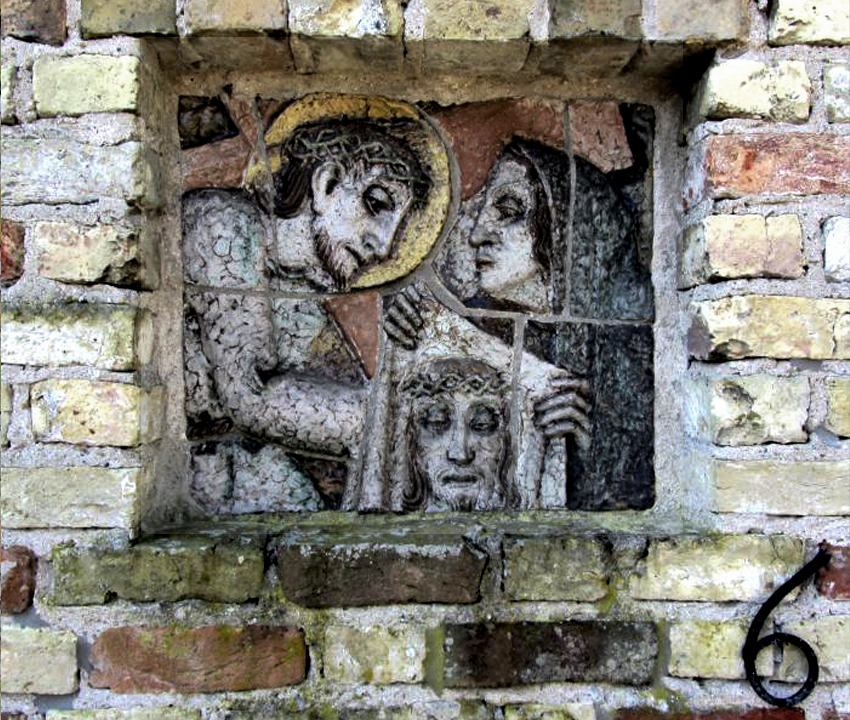 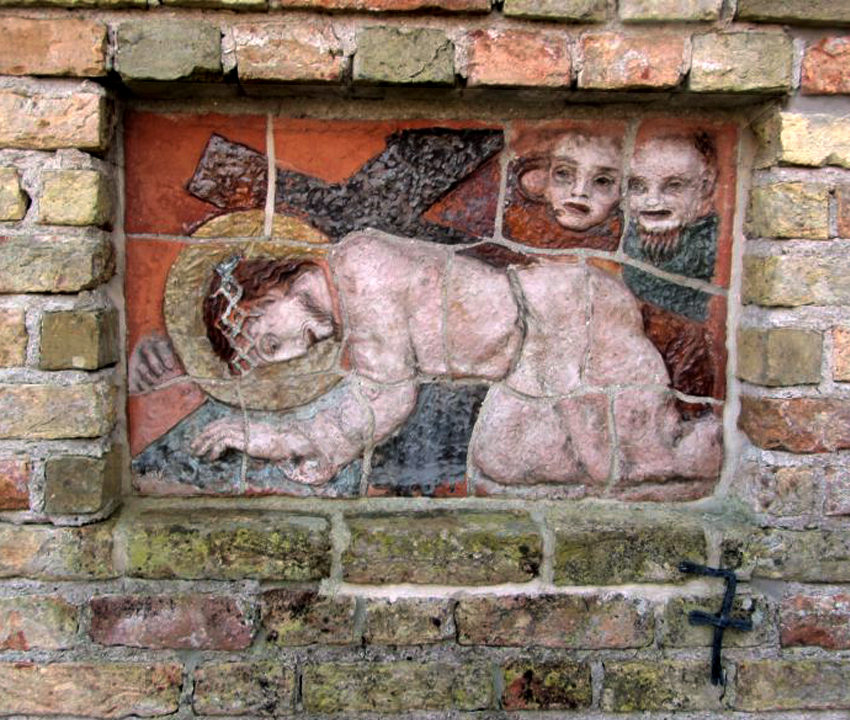 Jac Maris was born on February 21, 1900 in Magdeburg (DE). He is the grandson of Jacob Maris, the well-known landscape painter of the Hague School. At the age of fourteen, he was apprenticed to sculptor Achiilis Moortgat in Kleve, where he was living at the time. After 1915 Jac Marris was employed for several years by Rud. Bless (Kunsthandel Sier uw Huis, Nijmegen) for several years after 1915 and also designs sculptures which are initially fired elsewhere in Nijmegen, but then in Bless’ kiln. In 1917 the Maris family moved to Nijmegen.

By then Jac had begun a series of wanderings that took him to Düsseldorf (where he attended the academy), Belgium and England.

In the 1930s-forties he makes many statues of saints and other sacred works. He designs a Way of the Cross in majolica relief for the Way of the Cross parks of Bergharen and Dokkum, the latter commissioned by Titus Brandsma.

After the Second World War Maris, as a former resistance fighter, received several commissions for war monuments. The best known are the Airborne-monument in Oosterbeek, and in Nijmegen the monument on Plein 1944 and Jan van Hoof-memorial on the Waalbrug.
(Source: http://www.capriolus.nl/nl/
content/maris-jac) 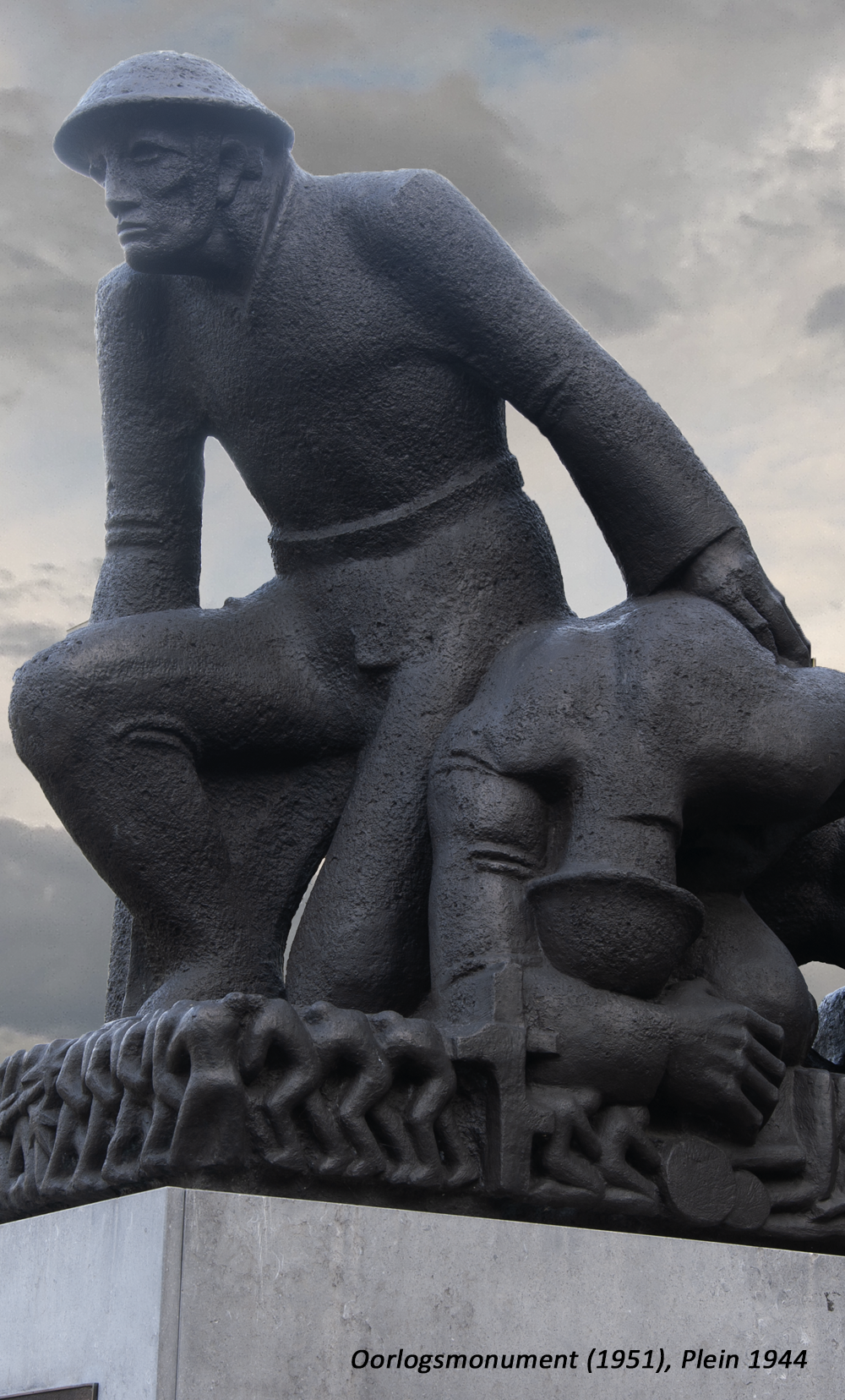 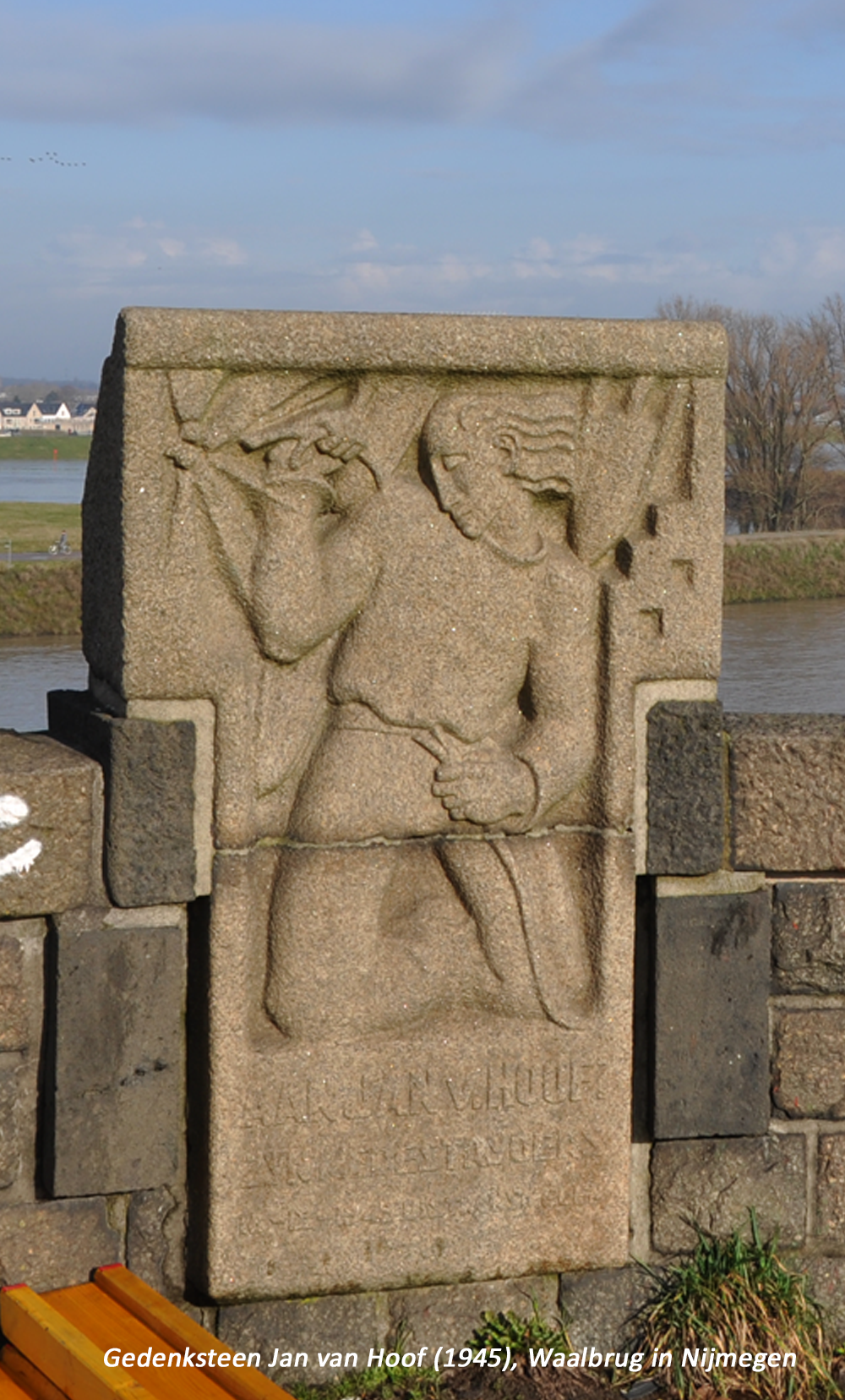 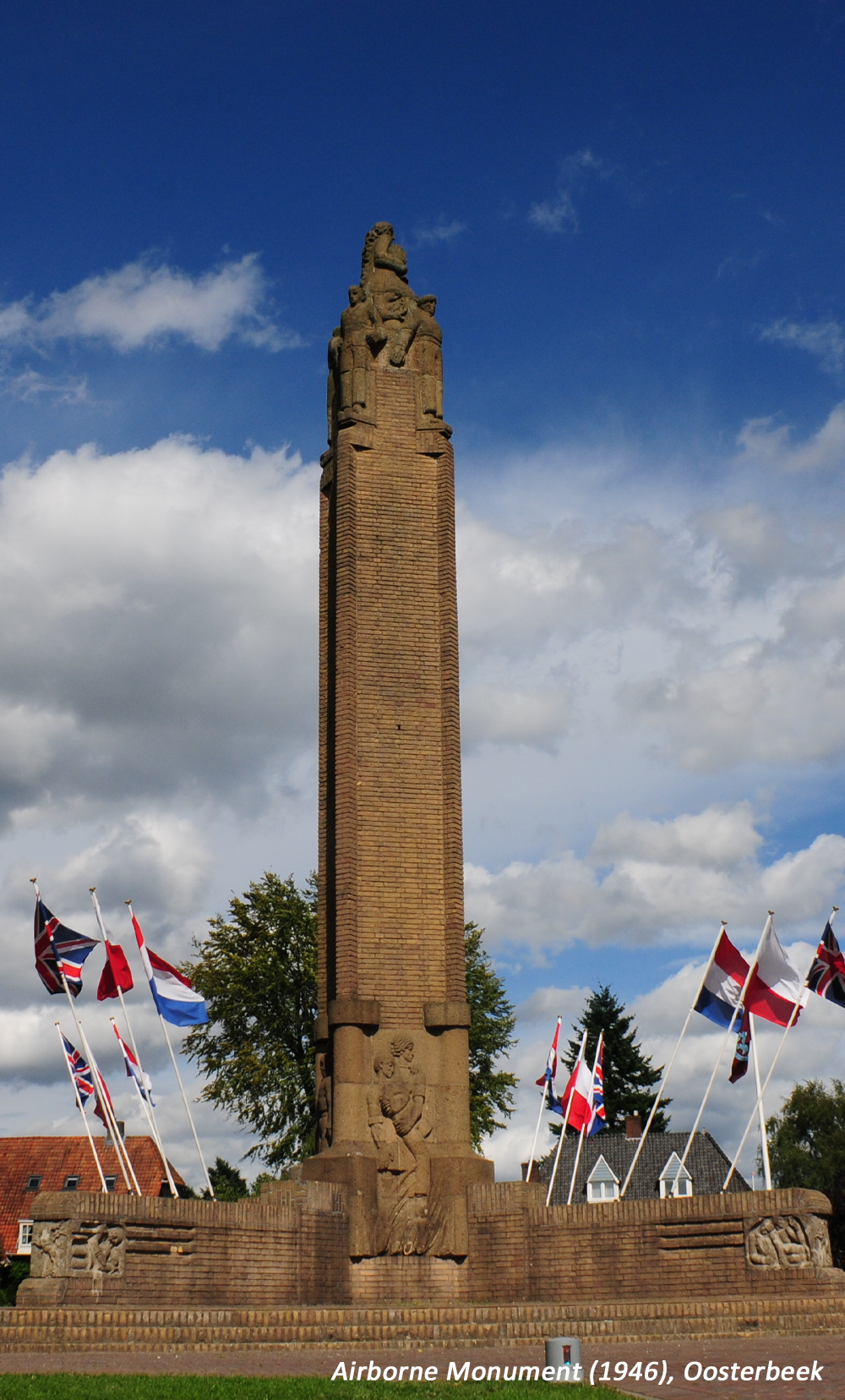 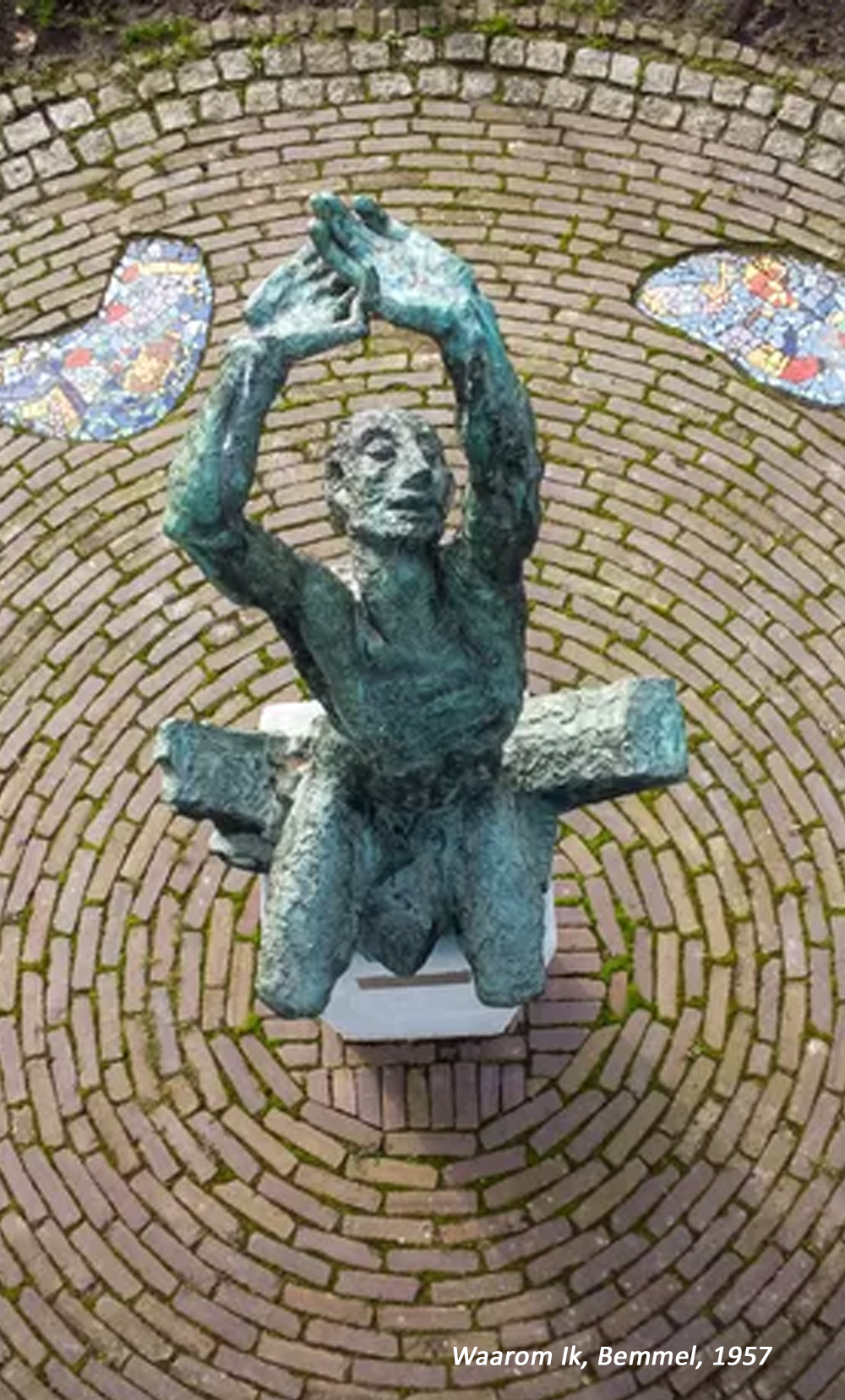 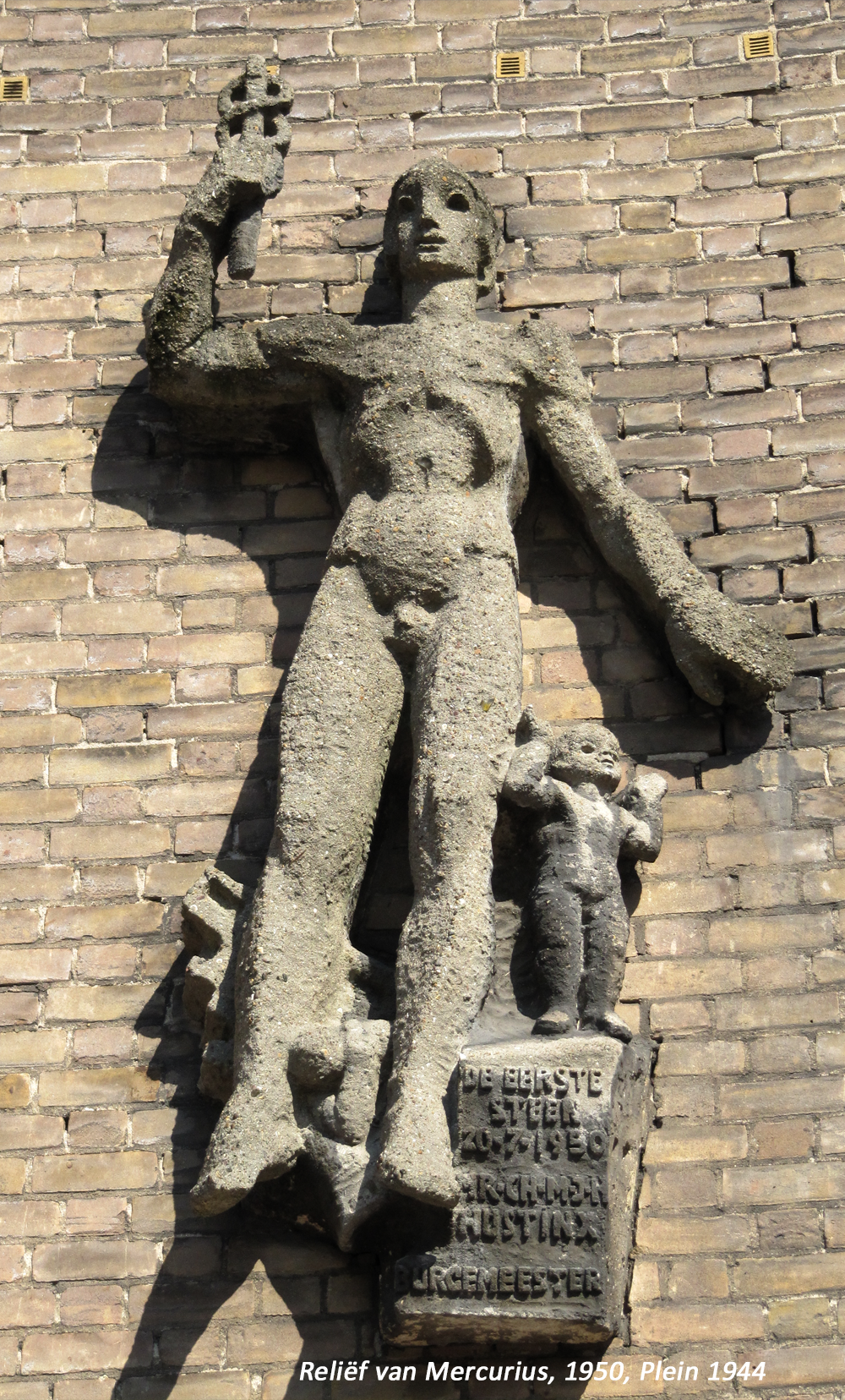 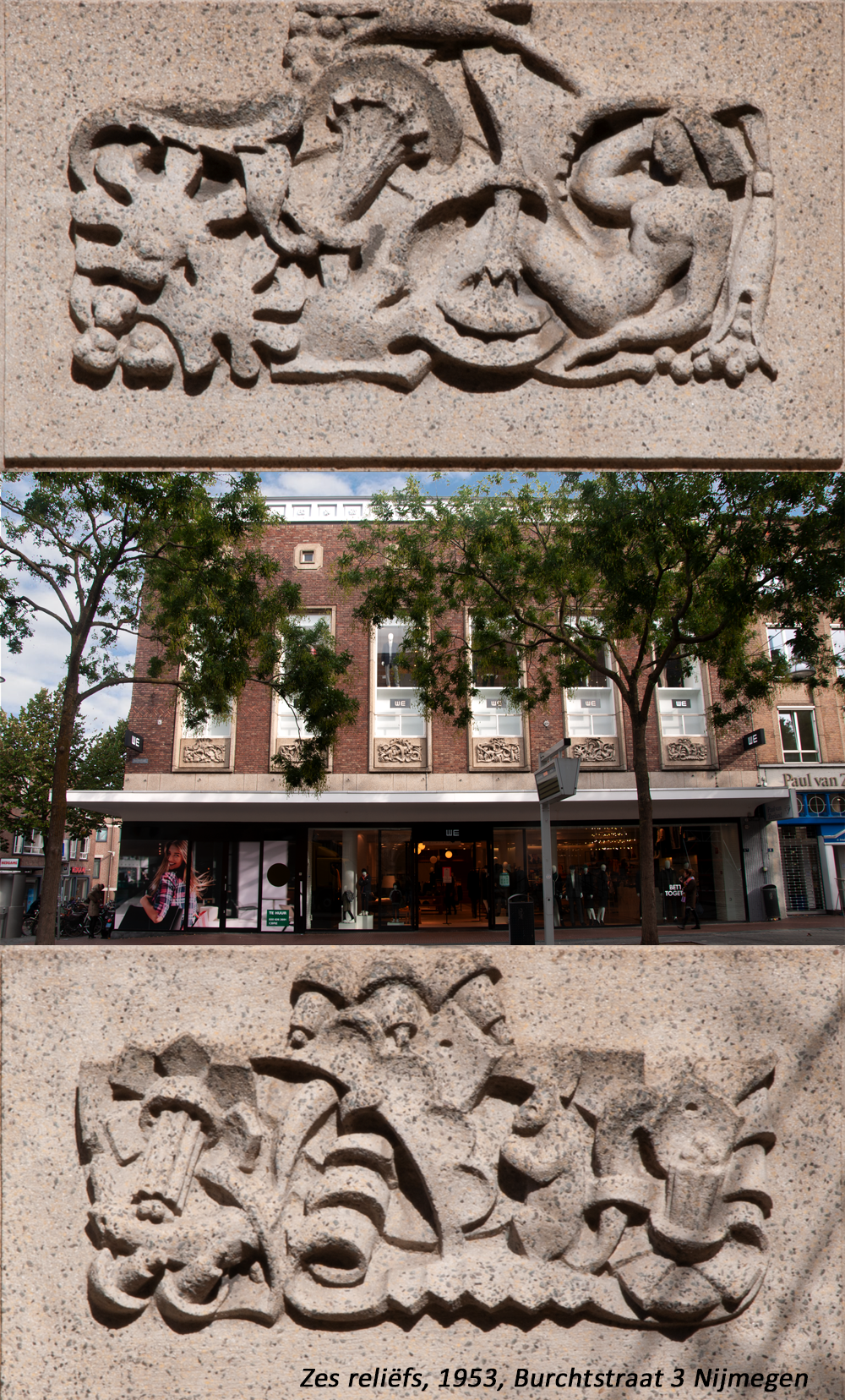 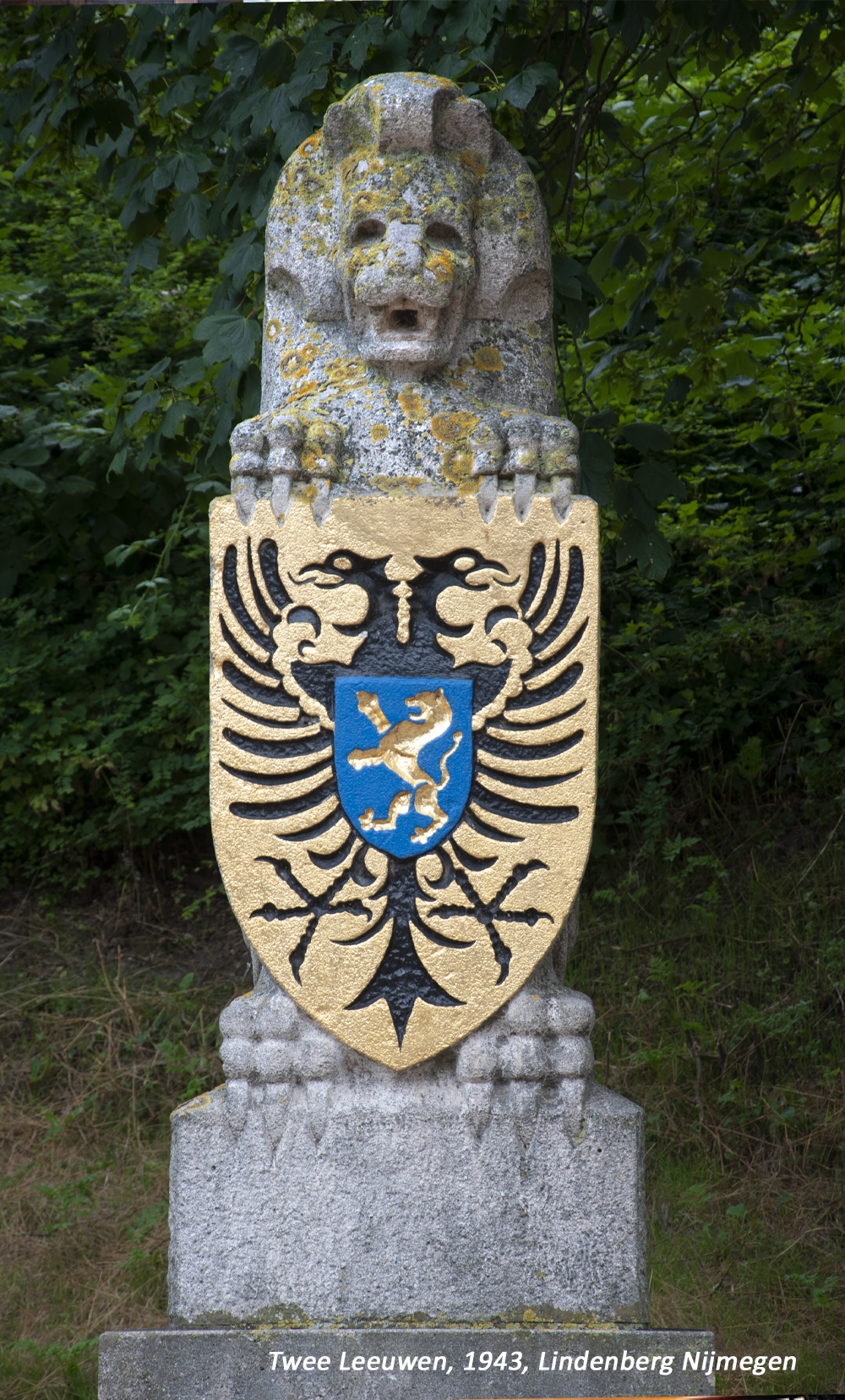 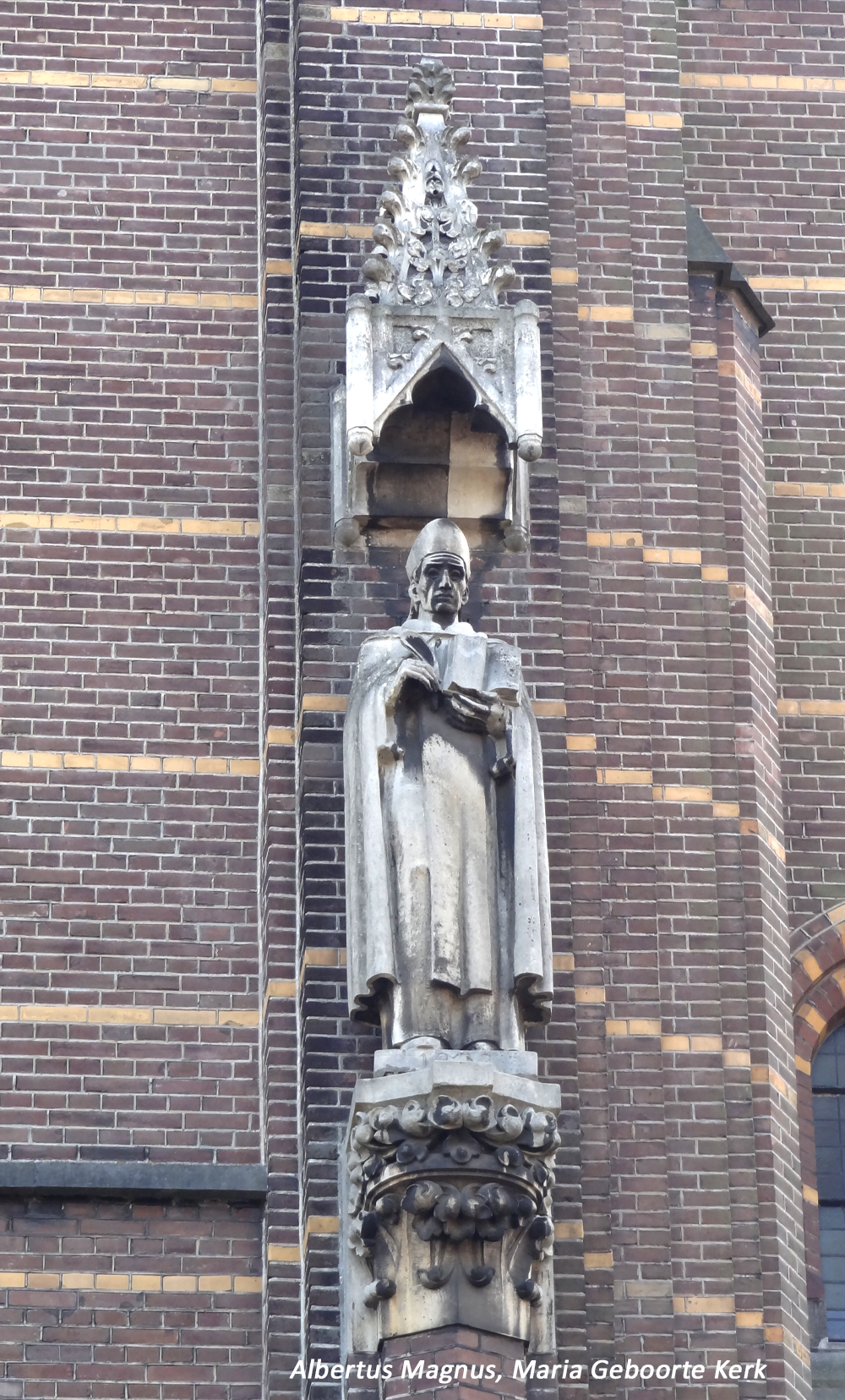 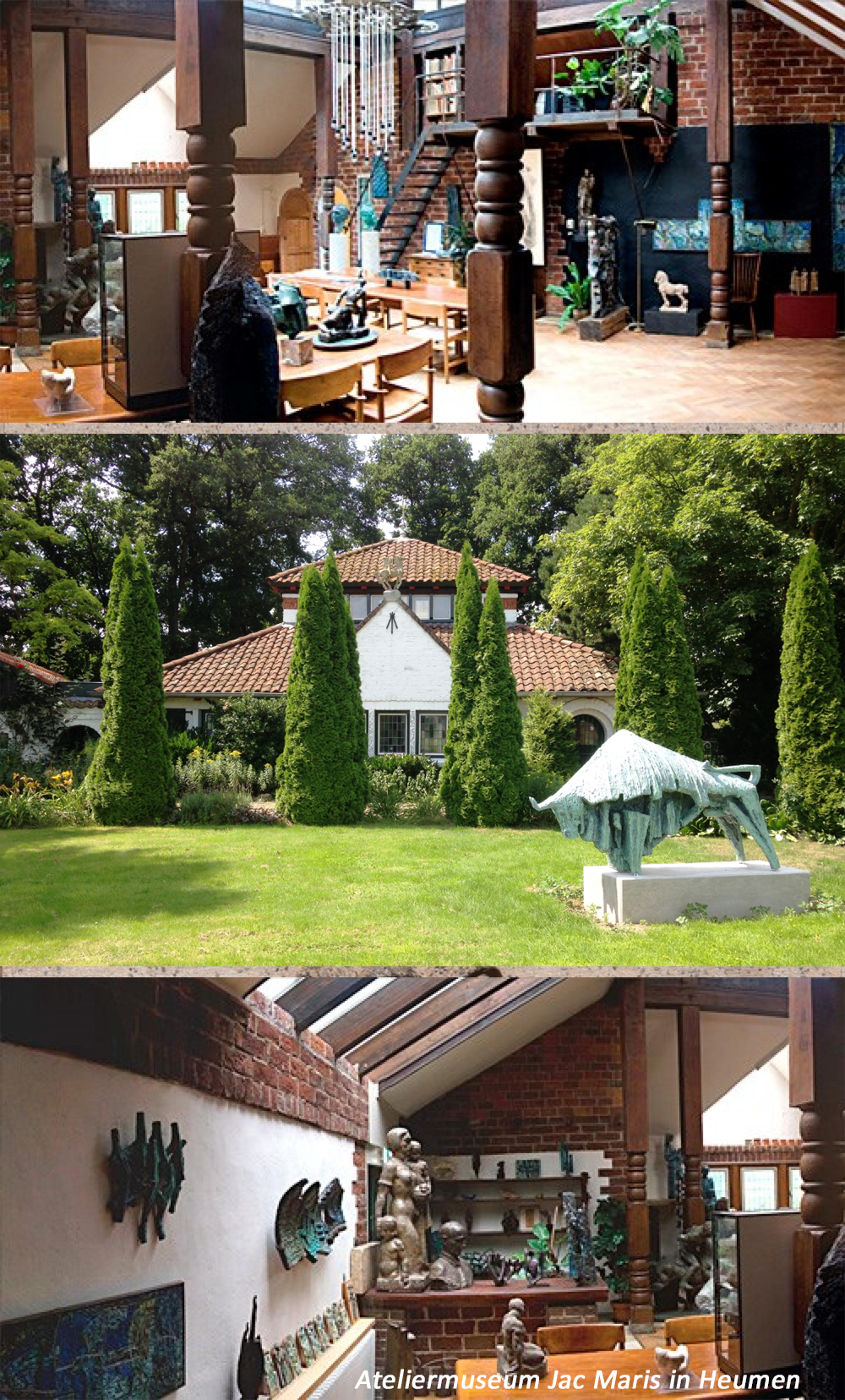 Between trips he is in Nijmegen, where he marries Wilhelmina Vermeer in 1923. Three years later he settles in Heumen, where he rents the Blokhuis, the current studio museum. He creates a rich oeuvre in wood, ceramics, artificial stone and natural stone. Since 1928 Maris also manifests himself outside the region.

As a religious artist, Maris has many contacts in the Catholic milieu.

In Nijmegen and its surroundings many works of art by Jac Maris can be seen, not only the well-known war memorials, but also sculptures that even Nijmegen citizens do not know exist. Here you can see these sculptures. In Heumen you can visit the Atelier Museum of Jac Maris. It is located in the former studio of Jac Maris. The museum shows a collection of works from the period 1915 to 1994. It has over one hundred works in stone, metal and bronze, about sixty ceramic works and over three hundred drawings. The Maris House also has a sculpture garden.

Titus Brandsma (1881-1942), resistance hero and defender of free speech, was born in Friesland. He became a Carmelite in the monastery at Boxmeer. After his ordination to the priesthood, he earned a doctorate in philosophy in Rome. In the Netherlands he taught young Carmelites in Oss. He made himself useful locally for the development of education and culture. He became professor at the Catholic University in Nijmegen. In his lectures he took a stand against national socialism.

As a spiritual advisor, he became involved with the national newspapers and journalists.

Personally, he traveled to the boards to convince them not to publish Nazi propaganda. Upon returning home to Nijmegen, he was arrested. The Sicherheitsdienst decided to imprison this “dangerous monk”. Via Scheveningen, Amersfoort and Kleve he ended up in Dachau, where fellow prisoners noticed his spiritual greatness. A lethal injection ended his life.

After the war he was posthumously awarded the Resistance Memorial Cross. Pope John Paul II beatified him in 1985 as a heroic witness to the faith.